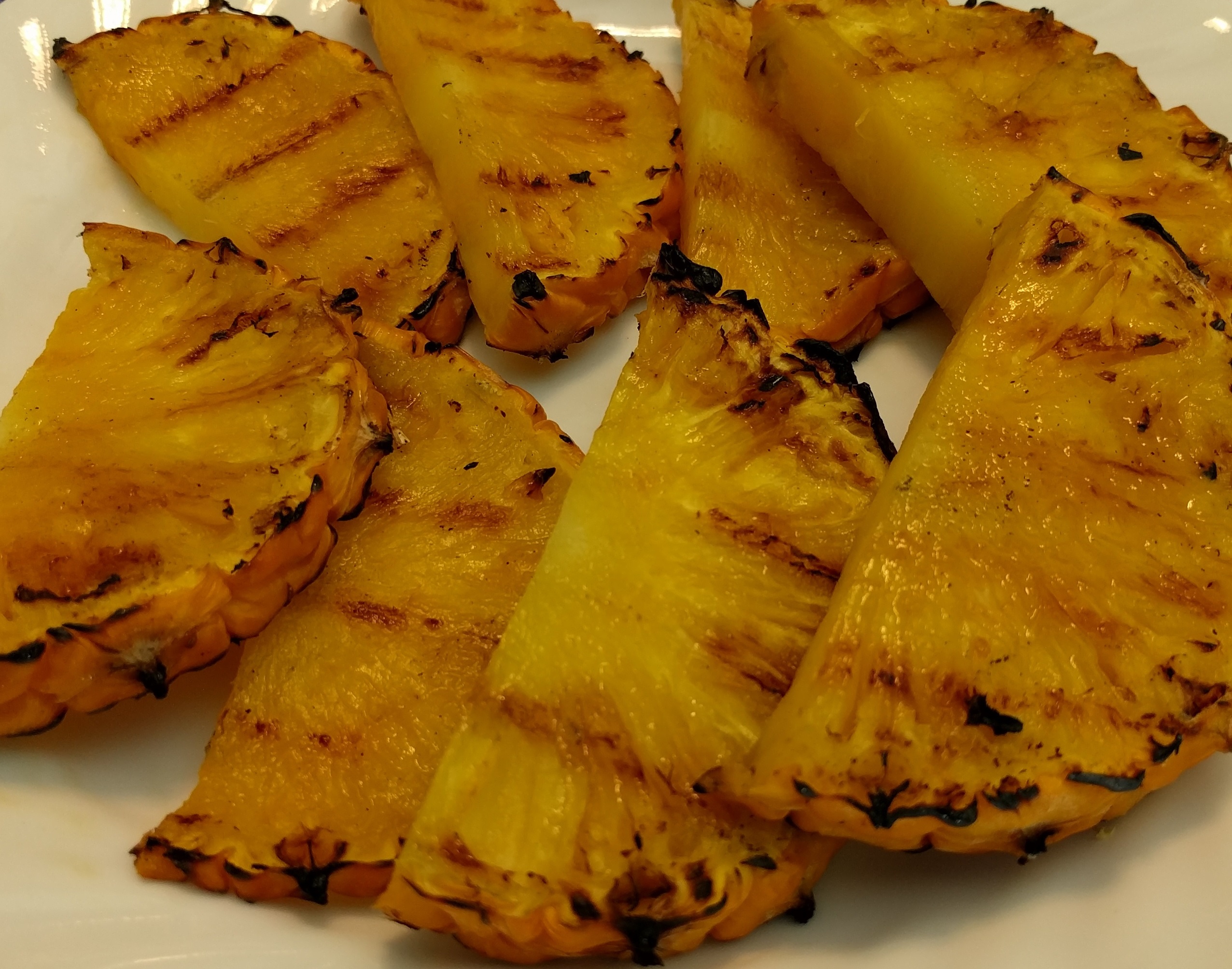 This is a very special treat because the pineapple is from our pineapple plant in our home garden and has been growing for several years.  Pineapples can take anywhere between 2 to 3 years before flowering.  This pineapple plant began flowering during the first week of March 2018.  Pineapple flowers are very pretty and they radiate outward in a circular pattern with hues of purple, pink, and red as illustrated below.  Pineapples are generated from a cluster of flowers, known as an inflorescence, grown out of the center of the plant.  The cluster of flowers eventually fuse together to create the pineapple fruit. 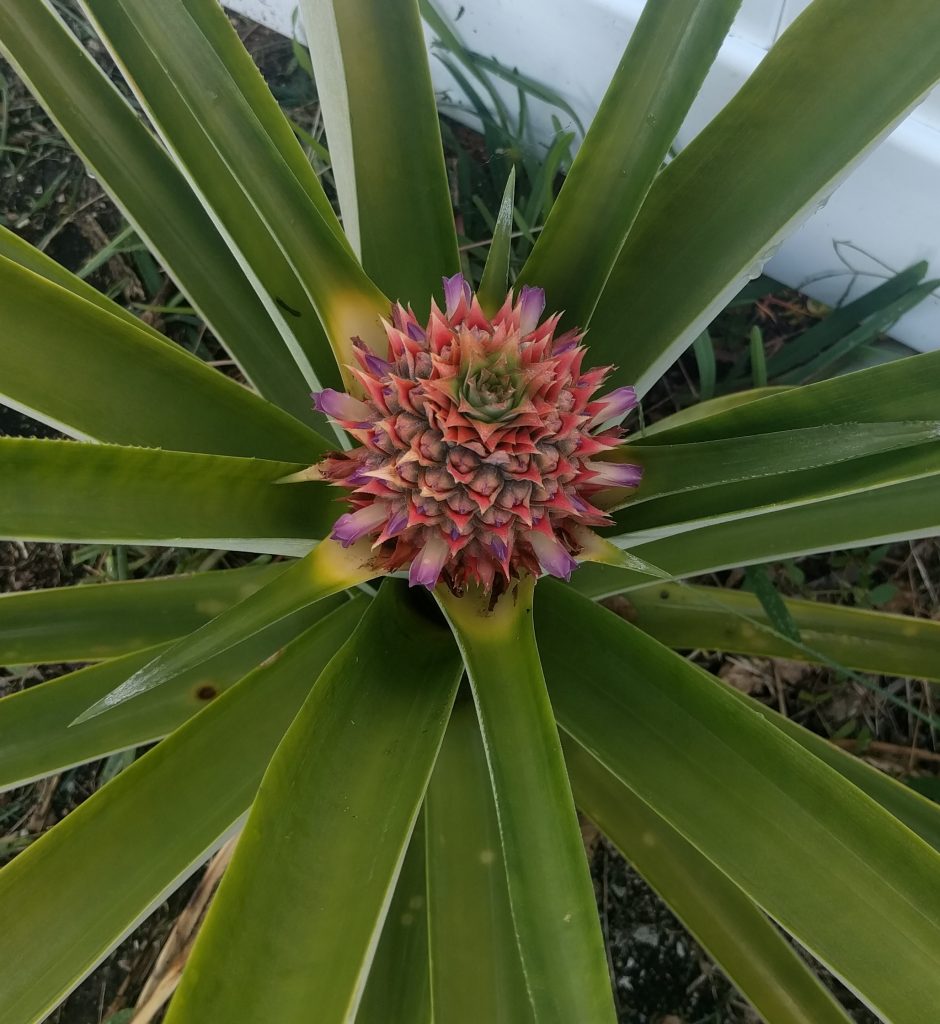 After about 4 months, the pineapple was finally fully ripened and ready to eat after having flowered back in early March. This pineapple was incredibly sweet and far better than any pineapple I’ve purchased at a grocery store.  Pineapples procured from stores are often harvested from the plant prior to the pineapple being fully ripened.  As a result, store bought fruit is good, but it simply can’t compare to the sweetness of a pineapple that was fully ripened on the plant.

When pineapples begin to ripen, the leathery exterior of the fruit starts turning yellow at the base of the fruit and the yellowing continues upward toward to the top.  The longer the fruit remains on the plant, the longer it has an opportunity to sweeten as the entire fruit turns yellow.   Once the entire fruit is yellow, the pineapple is ready.  Another way to determine whether the fruit is ready for harvesting is to place your nose near the base of the plant, and when it smells sweet like pineapple juice, it is ready for eating.  This pineapple was so amazingly ripe, you could smell its sweet fragrant aroma from about two feet away. 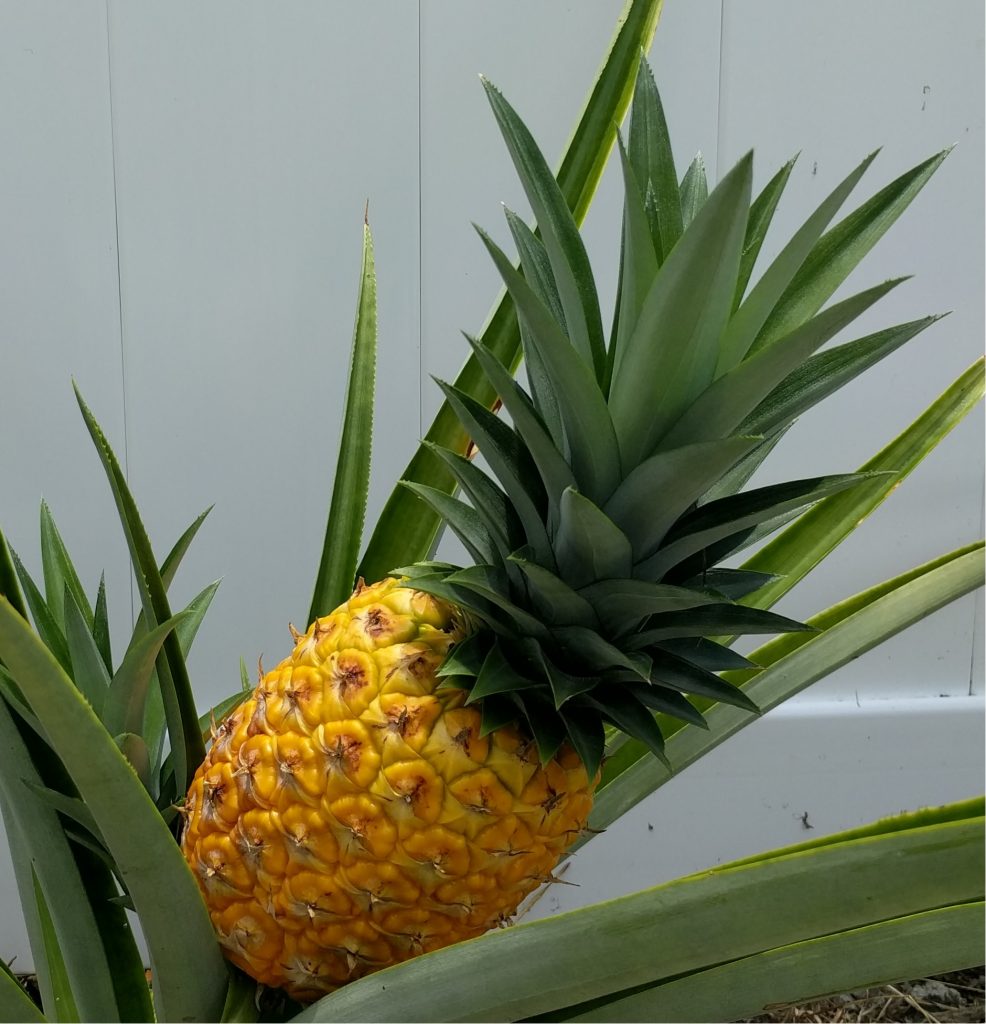 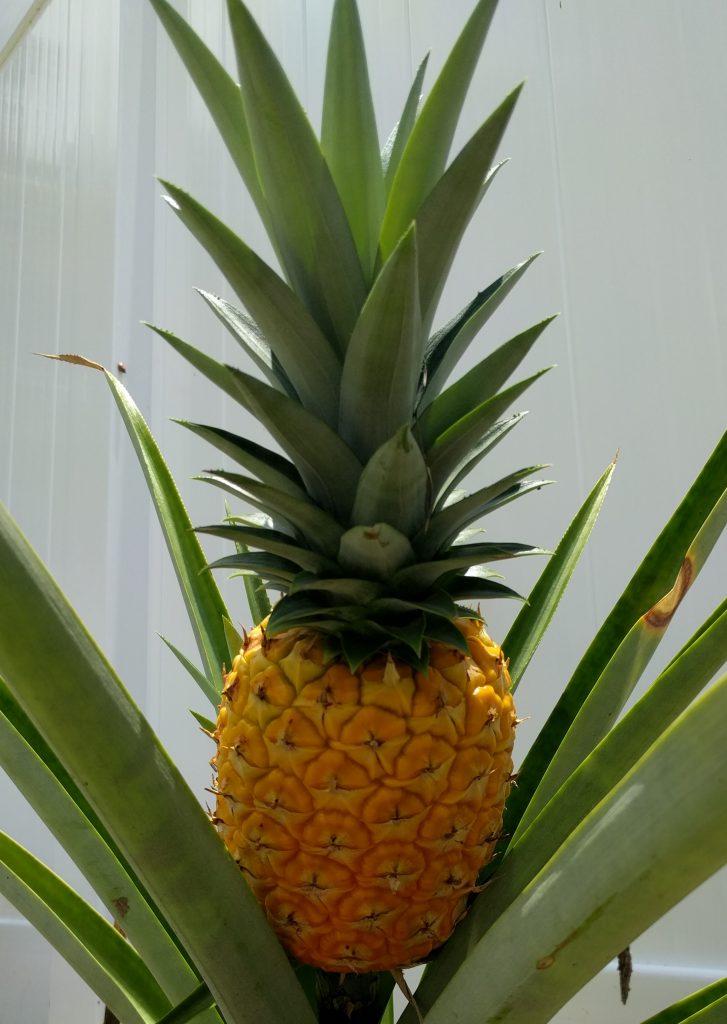 After the pineapple is ripe, it is time to carefully remove it from the plant.  You can do this by gripping the base of the stem with one hand and grasping the fruit in your other hand while applying light pressure in either a twisting motion or an angular motion. 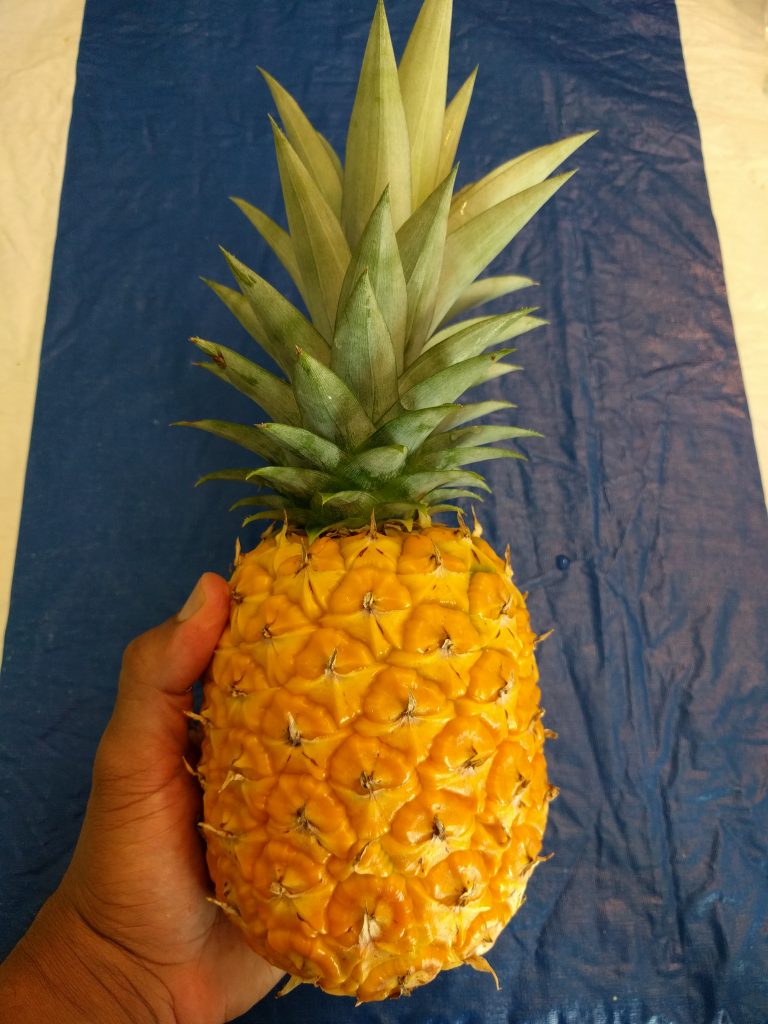 Step 1: Preheat the grill.  Use the Canola oil (or any oil with a relatively high smoking point) to oil the grates of the grill. 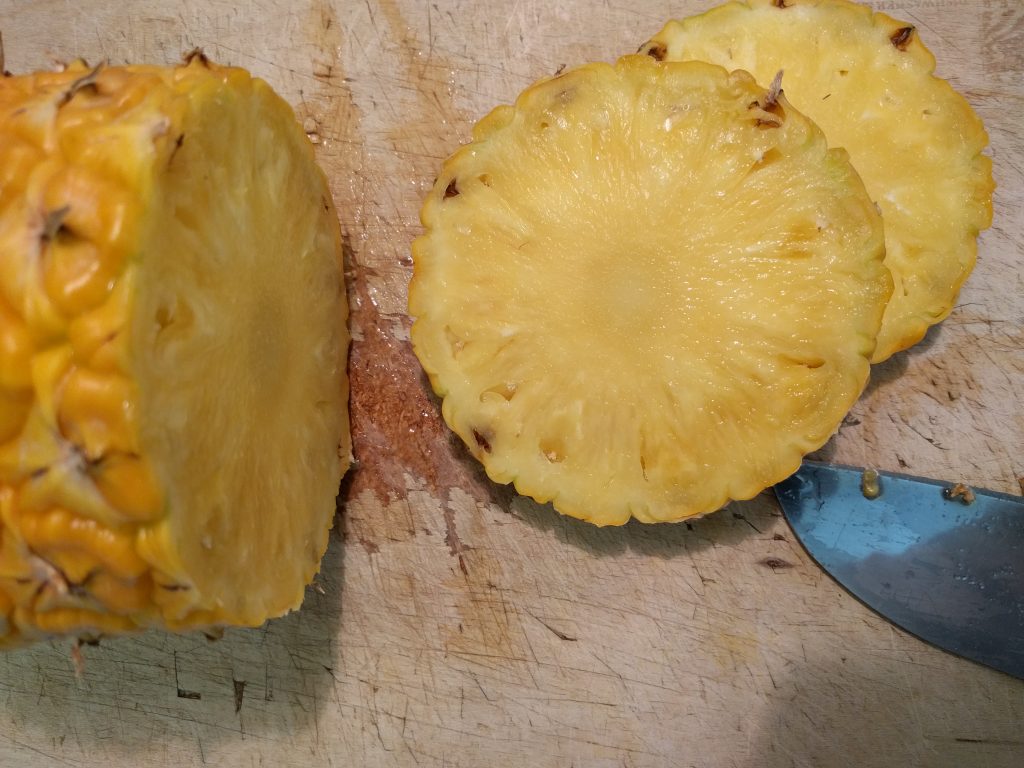 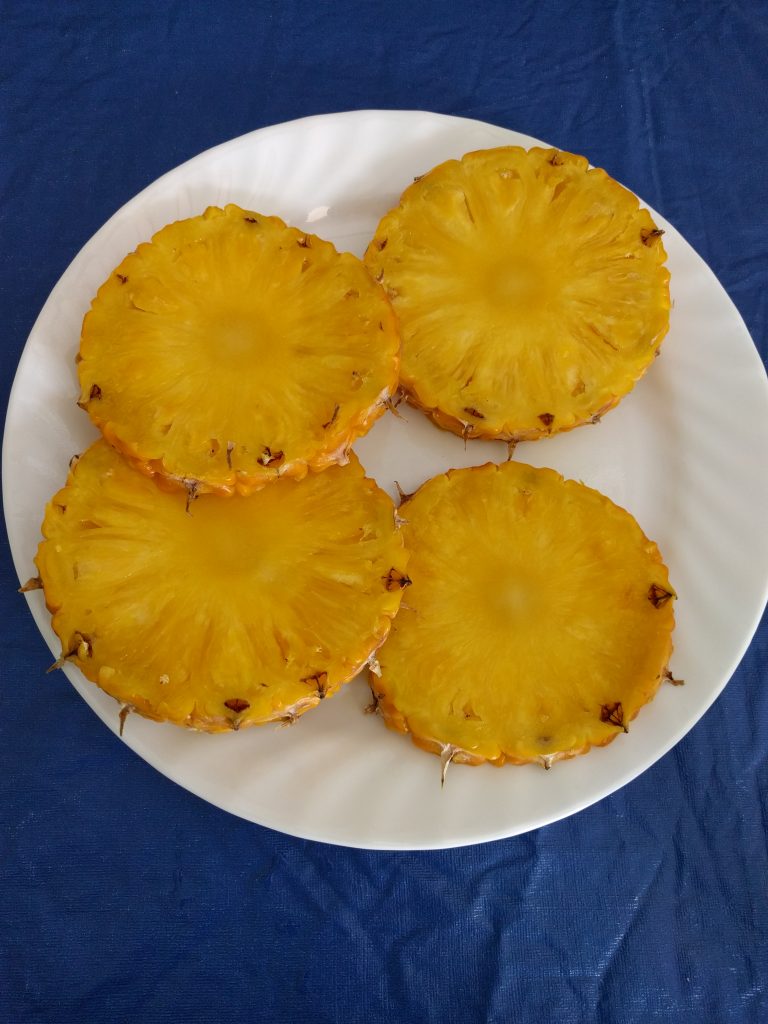 Step 3: (Optional) Season the pineapple slices to taste.  Some potential seasonings include brown sugar, coconut sugar, honey, sea salt, cinnamon, nutmeg, or even cayenne pepper if you like sweet and spicy.  I did not season the pineapple slices because this was my first time eating a home grown pineapple that was ripened on the plant.  I wanted to taste the natural deliciousness of a fully ripened pineapple. 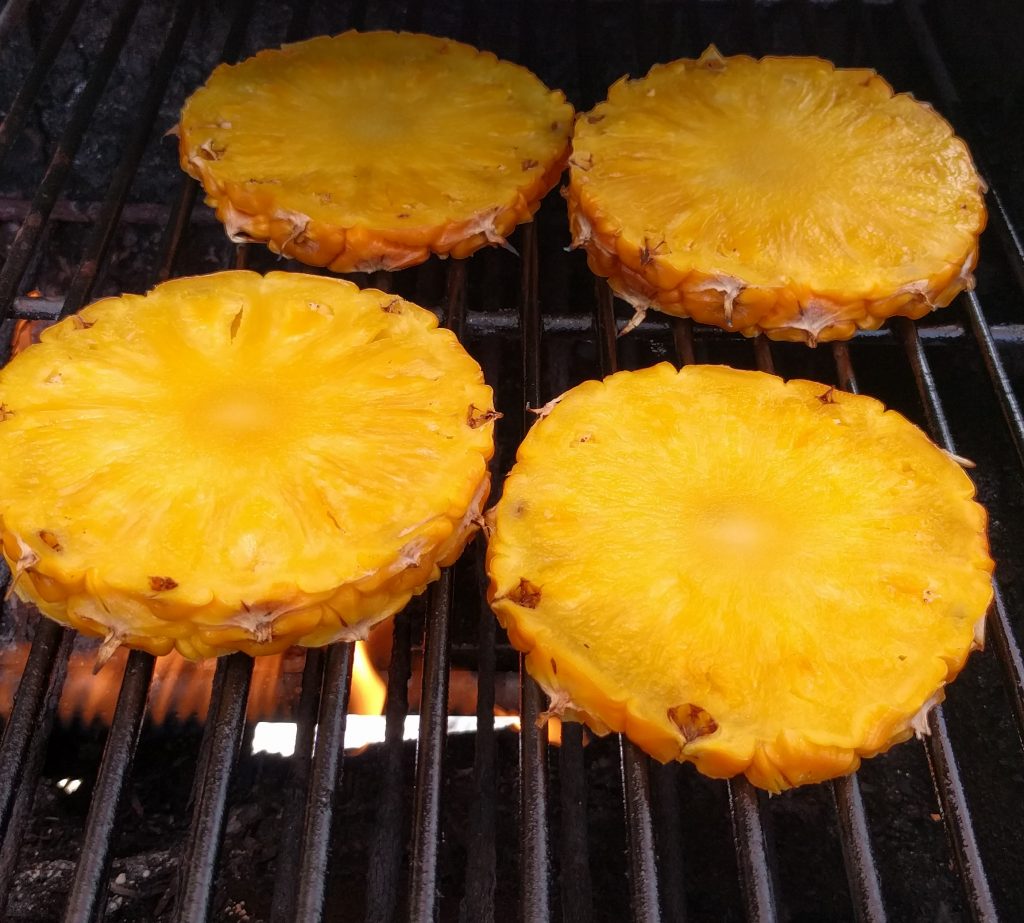 Step 4: Place the pineapple slices on the grill and cook for about 4-8 mins on each side or until sufficiently heated to your taste.  I like to grill pineapple until golden brown grill marks appear on the flesh of the fruit.  This enables the sugars of the pineapple to caramelize and creates a delicious snack or dessert.  However, you may grill it to your preference. 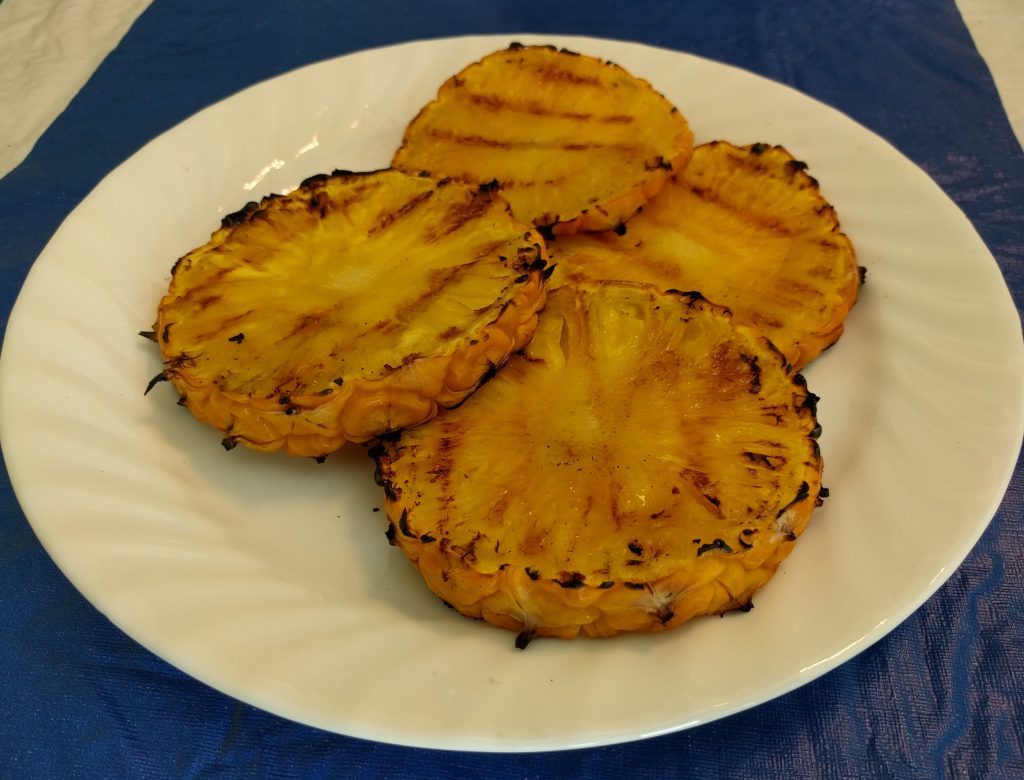 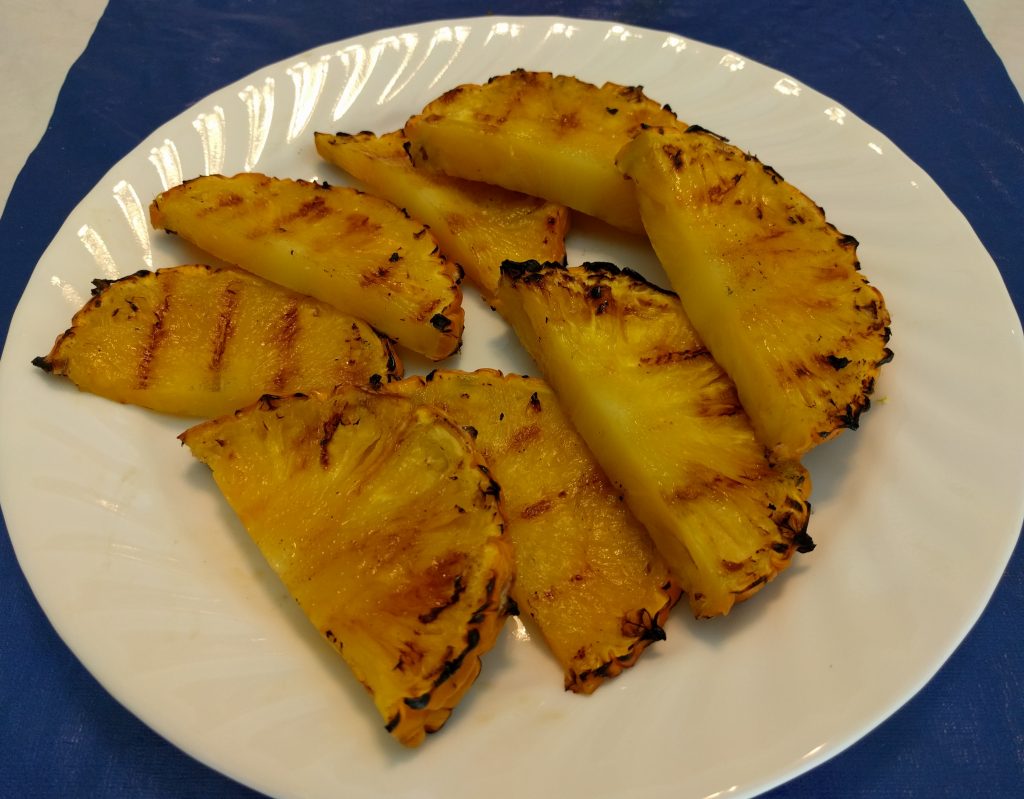 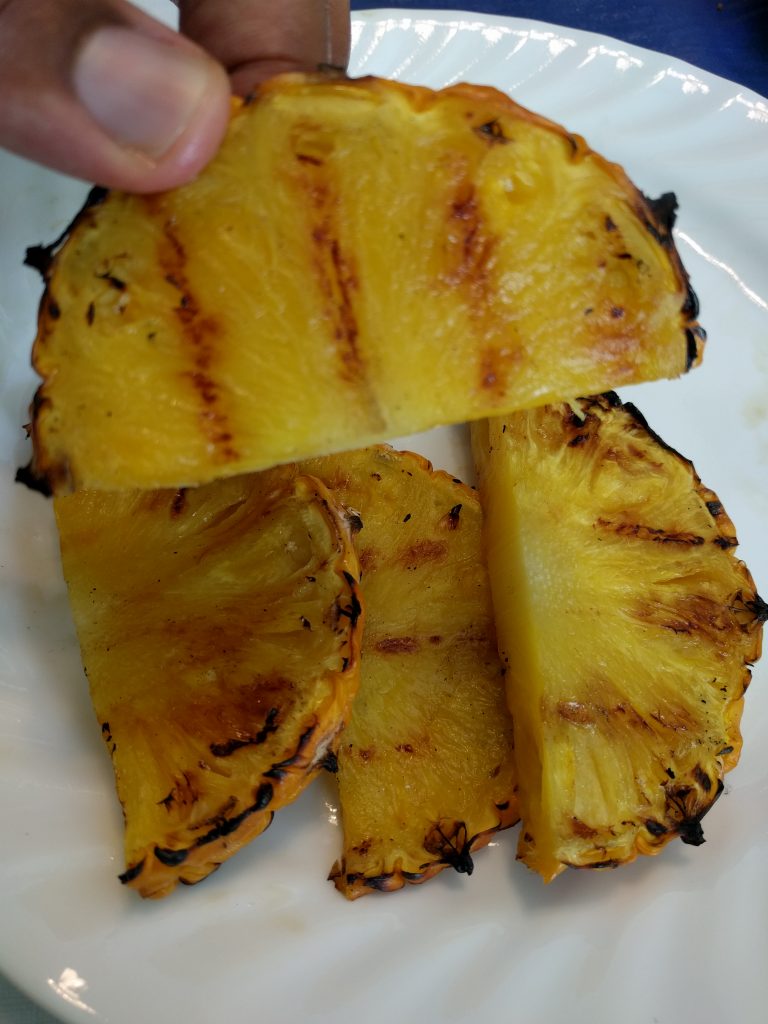 Powered by WordPress and Booster